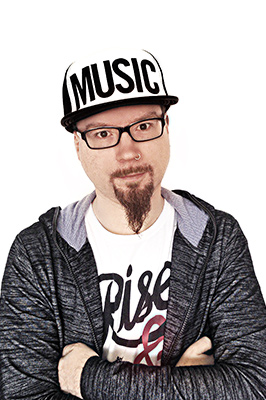 „For me there are no boundaries within music. No matter what genre, old or new. Everything I like gets mashed into something unique and new!“

DJ Schmolli from Vienna (Austria) has established himself to a fixed size in the DJ business over the years. In his energetic shows musical boundaries are broken and songs from different genres and eras get mixed up to rock every party. Mashup is the magical word to thrill the audience, worldwide. Party goers in Berlin, Moscow and Rio know the score!

He produced his first mashups during the time as an active musician in 2000, parallel to this he gained some experience on the turntables. Since 2007 he has devoted himself entirely to DJing. In addition to his role as resident DJ in Munich and Frankfurt he also played DJ sets in Vienna (eg Pratersauna, U4 and Ottakringer brewery), Paris, Berlin, Budapest, Zurich, Moscow, New York, Los Angeles and Rio de Janeiro, to name just a few. Not to forget the legendary performance in the birthplace of the “Bootie” mashup parties San Francisco where over 1,300 ecstatic fans celebrated with him. At festivals Schmolli is a frequently booked act, such as the Paaspop festival in Holland or the VOLT Festival in Sopron (Hungary).

Until now DJ Schmolli has produced over 350 mashups that also get lots of radio airplay, for example on BBC Radio1 or Austria’s biggest station OE3. But above all the internet is the largest platform for his productions. His videos are reaching hundreds of thousands of views on Youtube, making him one of the most successful mashup producers in the world. He easily blended 80s cult hits with current chart toppers, mixes Coldplay with the Beach Boys, Sean Paul with Falco. Or why not taking all the stadium hymns & singalongs and blending them into the “Super Bowl Anthem”? Even print media such as the “Washington Post” and the “Toronto Star” have already become aware of him.

DJ Schmolli is not only mixing existing material into mashups, occasionally he also produces his own tracks and remixes, like his moombahton remix of “Iko Iko” and his dubstep remix of Seether’s “Tonight” with which he went runner-up in an official remix contest with more than 200 participants.

In 2017 DJ Schmolli is rocking the clubs again! In addition to appearances thoughout Europe where he presents his latest productions an U.S. tour for later this year is also in the making.

All mixes linked to on this site are created for entertainment, and as demonstration of mixing and production techniques only. The copyright for the individual tracks used remains with the artist. If you like the mixes I have created, please buy the original songs and support the artists. If you are a representative of either the artist or the publishing company and would like the tracks removed, please contact me directly and I will take the tracks offline. Better still, if you are a representative of the artist and like what I have done, contact me directly and offer me some proper remix work.
Loading Comments...
%d bloggers like this: